Tournaments » WePlay AniMajor 2022: Getting Ready for The International 10

Dota 2 and WePlay: a Fruitful Collaboration

When thinking of esports, big events, huge prize pools, and unforgettable moments, then you cannot avoid including Dota 2 in the list of the most successful titles. By making the history of esports, Dota 2 has survived the test of time and now triumphantly sits at the top. Despite (understandable) problems such as a steep learning curve and a slightly declining player base, Valve, the game’s developer and publisher company, has recently shown profound interest in renewing and improving its creation.

Valve has been introducing a new player experience in the past months, big quality of life changes, new heroes, and more. Among these surprises, which have brought the community together and renovated the (old and new) players’ interest in the game, the new DPC (Dota Pro Circuit) season is bringing to the game a new level of professional competition.

The best teams fight each other in regional leagues, which then conclude with international majors, the biggest events in the Dota 2 world apart from The International.

The last major before TI10 (which, by the way, has the biggest prize pool in esports history: $40,018,195) was the AniMajor, organized by WePlay Esports. The company was founded in 2012 in Kyiv, Ukraine, and began organizing Dota 2 events in 2013. Their events have always received very positive reviews because of the good combination between professionalism and memes, quality of the stage and of the broadcast, and attention to the fans. In short, when a Valve event is organized by WePlay, rest assured you will have a good show. The WePlay AniMajor 2022 started on June 2 and ended on the 13th. If you missed the action, here we are with a recap of all the info you need: stages, participants, prize pool, and much more. 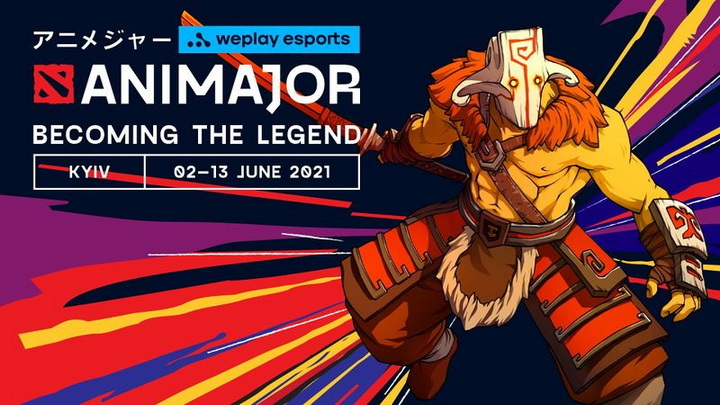 What Is the AniMajor?

The AniMajor is a Valve-sponsored event organized by WePlay. “Ani” refers to “anime”, which was the general theme of the event: stage, talent crew, and everything regarding the event was based on the topic of anime. “Major” is the denomination some of the tournaments of the DPC get. Majors are those events hosted in the conclusion of a DPC season, collecting the best teams from all six regions: four from Western Europe and China, three from South East Asia and Eastern Europe, two from North and South America. Majors are the most important Dota events after The International, which takes place in August.

In total, eighteen teams from all corners of the world battled from June 2 to June 13 for a prize pool of $500,000 USD and, most importantly, 2,700 DPC points. DPC points are awarded to the teams which reach a high place in a tournament, and the amount of DPC points a team has determines it making it to TI or not. All games were played following the Dota game version 7.89d.

Now that we know the basis of the AniMajor and its importance in the Dota 2 scene let’s dive a bit deeper into the tournament itself. In the following sections, we will find out more specific info on teams playing, their performances, all stages of the event, and much more.

We want to begin by presenting to you an overview of the teams present at the Animajor. There are three main categories: Wild Card Seeds, Group Stage Seeds, and Playoffs Seeds. 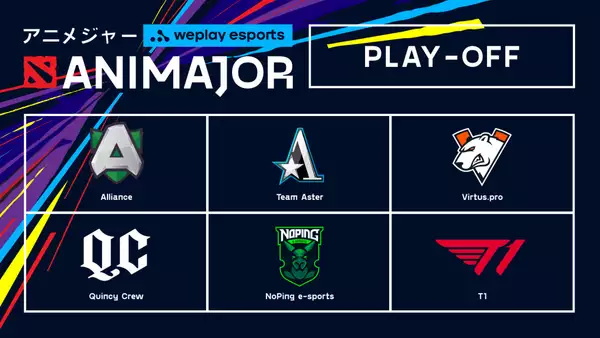 Those teams directly invited to the playoffs are the 1st place team in each region at the end of the season. They get a place directly in the Upper Bracket of the main tournament without having to go through group stages.

Here we have again six teams, those who got the last place in each region. These teams get to play in the Group Stage. We won’t present each team like in the last paragraph because it would be too long, but here is the list of teams who qualified to this stage of the AniMajor.

Because the tournament format required one more team from SEA, one from CIS, two from Europe, and two from China, in the first two regions, 3rd place teams are qualified to the Major Wild Card, in the latter two, the 3rd as well as the 4th. Therefore we have the following list of teams:

Only two out of these six teams had the possibility of reaching the Group Stage of the Major.

How did the AniMajor progress? How did the teams do in each of these stages? Let’s find out.

The Wild Card stage was the first one to be played, of course. In two days, starting on June 2, the two teams fought against each other and, as anticipated, only two teams could come out on top. These two were Vici Gaming, with a score of 2-3-0, and Team Nigma, with 2-2-1. Team Secret, definitely one of the strongest competitors of last season and one of the favorites to win the Major, hugely disappointed its fans by going 0-4-1 and therefore losing its chance of going to the Main Stage of the Major. But not a disappointment as big as that of OG, first time back to back TI winners in 2018 and 2019, which did not even manage to stay in the Upper Bracket of the EU regional league.

On June 4 began the “real” tournament with the Group Stage, which determined two teams joining Alliance, Team Aster, T1, VP, Quincy Crew, and No Ping in the Upper Bracket of the playoffs, four going to the Lower Bracket, and two to be eliminated from the AniMajor. The eight teams played a single round-robin, Bo2 matches, and even a tiebreaker to decide who would be flying home among Team Spirit and Team Liquid. 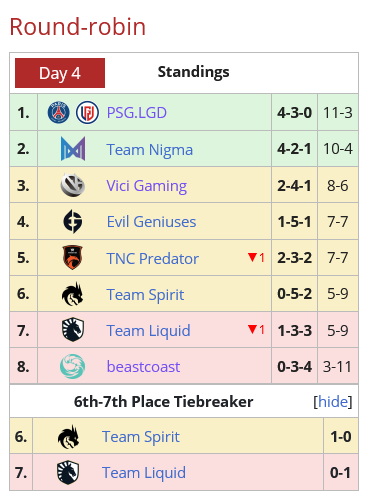 As you can imagine, there were some surprises: first of all, the dominance of China and Western Europe showed well, getting the first two places in the group stage. Team Liquid, despite the favorable odds, got eliminated immediately and did not reach the Main Stage of the tournament. Meanwhile, SA was left with only No Ping in the tournament, the team which already qualified for the Playoffs because Beastcoast never won a series.

But now, let’s get to the Main Event. Here is the Playoffs Stage after the first two days of matches:

As you can see, the last standing for South America, No Ping, got eliminated from Upper and then from Lower Bracket, and unfortunately got eliminated from the tournament despite taking one game off from EG (who then, spoiler, ended up getting 2nd place at the Major). South America is a growing region in the Dota 2 scene, suffering from problems like low ping and difficulty in practicing against high-rated teams and players, but it is showing it deserves the same attention as other regions. If we give them the opportunity to practice at an international level, we are confident they will reach unthinkable levels, like they have proven in the past.

Moving on from SA, another huge disappointment was the elimination of Alliance, the team that qualified first in the EU regional league. Following this disaster, it is recent news that the team decided to let go of their coach, renowned pro player PPD. We don’t know how much PPD had to do with the team’s results, but hopefully, this change will turn out to be better for both parties. Same disappointment with Team Aster, which won 1st place in the Chinese regional League and which ended up eliminated in the first two games of the playoffs. Two last things to remark from the first two days: the dominance of PSG.LGD and of T1.

In fact, these latter teams ended up being in the Upper Bracket Final of the AniMajor, with LGD winning 2-1 against the SEA monsters. Defying odds, T1 proved to be exceptional in all their games, playing polished, coordinated Dota. After losing in the UB Final against LGD, T1 fell into the Lower Bracket Final meeting Evil Geniuses, which made it all the way through Lower Bracket. EG showed dominance beating TNC Predator, Team Nigma, and Vici Gaming, very strong teams against whom EG applied fine gameplay tactics. Despite the expectations, therefore, no EU teams managed to get even top 4 at the Major, even though it was claimed to be among the strongest regions in Dota. Vici Gaming (CN) got 4th place, and T1 (SEA), losing 1-2 against EG in the LB Finals, got 3rd. Now the battle was against two giants: PSG-LGD (again, CN) and Evil Geniuses (EG).

But there is little battle if one team is simply superior: the Grand Finals of the AniMajor, in the classic Bo5 style, ended with a clean 3-0. The winner? PSG.LGD, which had qualified for the Group Stage of the Major and which, from there, never ever lost a series. Going 4-3-0 in the group stage and thus receiving a place in the UB of the Playoffs, they went on to beat Team Nigma, T1, and finally, in the Grand Finals, Evil Geniuses. Commentators have no doubts: LGD were the best team throughout the entire tournament and hands down deserved first place at the Major.

Ame is perhaps the best carry in this season (although there were a few contenders even in the past), and the other players (NothingToSay, Faith_bian, XinQ and y) showed impressive performances in their roles and masterclass understanding of the current meta. It didn’t look close for any team against which they played, making them the favorites going into TI10. It is especially remarkable their drafting knowledge, also thanks to legend xiao8, one of the best veteran players in the history of Dota 2 who is now LGD’s coach: they knew perfectly which heroes to pick and ban, forming a squad of heroes which already on paper had the advantage over the enemy’s draft.

The WePlay AniMajor was one of the best esports tournaments this year, not only for the level of competition, high skill, surprises, and disappointments but also for the fantastic production WePlay showed throughout the whole event. Stage, memes, between-the-games sketches were top quality, and they even gave the fans some gems like the ODPixel rap.

The ending ruined the atmosphere a bit: the viewers were left with no winner’s interview and no closing ceremony or anything of that kind. Despite this little disappointment, the AniMajor was a success and definitely deserves its praise. Hundreds of thousands followed the games live on Twitch or are now watching the VODs in case they missed some of the action, and the hype is through the roof to see how the teams will do in the upcoming International (which will start on August 5). Will LGD finally win the Aegis? Or will the other teams prepare better? Everything remains to be seen.