Blog » Best Dota 2 Hero for Beginners on All Positions

New Players Are Coming to Dota 2

Before finding out what the best Dota 2 hero for beginners is, we first want to give you a bit of general information so that we are on the same page. Dota 2 is one of the most successful RTS (Real-Time Strategy) video games and esports titles. In spite of having been released officially to the public by Valve many years ago, with the Beta out in 2011 and the complete game in 2013, the game is still enjoying a high popularity. In the past few months, the Dota community was happy to welcome a set of changes that made the game’s quality of life better and introduced new and revamped possibilities for new players to navigate through the world of Dota 2. 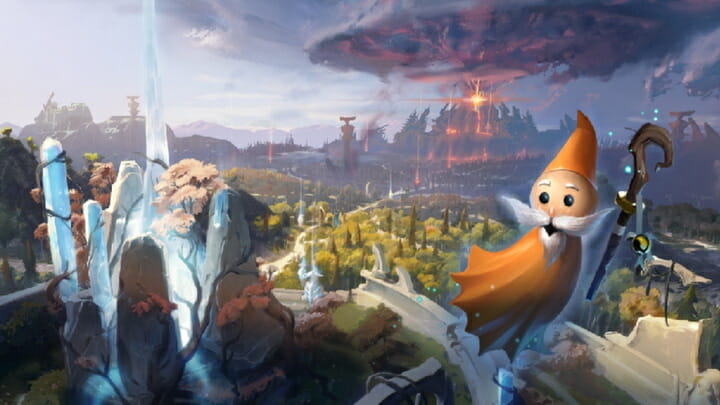 It is now easier than ever to get into the game. The learning curve is quite steep, we agree, but that is what makes Dota so complex and fascinating and is one of the main aspects of the game. Without some challenges, where would the fun be? In any case, Valve really put effort into easing your way into Dota mechanics, especially focusing on matching you with newbies like you, giving you the possibility of being followed by a coach in real time as you play, allowing you to play against bots and with real humans on your team, offering dozens of tutorials to learn every major aspect of the game and much more.

What we can do to help you play this great game is offer you a list of heroes suitable for a new player like you. We are going to catalog them according to the position they are mostly played in, although remember that the beauty of Dota is that the meta and strats often change, and a hero could be played theoretically in every position. First of all, what are the positions in Dota? Let’s find out.

Ok, we already anticipated there are five main positions in Dota 2. We want to go a bit more in-depth. The game presents a map made out of three main lanes for each side (Radiant and Dire). These three lanes are Top, Mid, and Bot (bottom). For the Radiant, the top lane will also be known as the “hard lane”, because the Radiant hero/heroes playing there will be farther away from their tower and, therefore, from protection. On the contrary, the bot lane will be known as the “safe lane” because they will be able to farm the lane creeps near their tower. Because the map is specular, for Dire the top lane will be the safe one, the bot one the hard for the same reasons explained above. 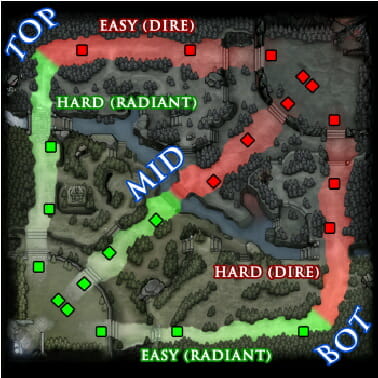 If there are three lanes, the first three positions will be the ones of the heroes destined to go on those lanes. Position 1, or Carry, will go to the safe lane, as they can (more or less) safely farm and get fatter without being threatened too much by the enemies. The mid lane will be occupied by the Midlaner, or position 2 (duh), and the hard lane by the Offlaner, or position 3. The latter’s job is to harass as much as possible the enemy Carry, and take farm away from them.

We are left with two positions. They are the supports. Pos 4 support is sometimes known as the roamer because between the two is the one who will mostly go around the map, ganking and initiating teamfights. This, however, hugely depends on the meta; there have been patches in which it was nearly impossible, or very disadvantageous, for a pos 4 to roam around, and so generally, when they can’t, or don’t want to, do it, they go with their Offlaner. Pos 5 support, sometimes called “hard support”, is the sacrificial one. Their job is mostly to babysit the Carry on the safelane, plant wards, secure farm for the higher positions, and die instead of them, so the team doesn’t lose too much.

Best Heroes For Beginners On Every Position

Now that you have a very rough and basic understanding of positions, it’s time to focus on the best part: playing. If you are a new player and don’t know what hero to pick among the 121 available for free since the beginning, we have chosen one hero for each position we think is best to get your first games of Dota 2 going. In any case, after a bit of playing, you will notice that you truly have a lot of freedom to experience different heroes, positions, etc. Take our advice as very basic concepts from which to start.

Yurnero the Juggernaut is one of the oldest and most played carries at all levels since the very beginning of Dota 2. He is a melee agility hero able to sprint into battle and devastate enemies in a fury of blades. The reason we put him here is the relative simplicity of abilities he has, as well as the fact that his game plan throughout the whole duration of the game is pretty straightforward to execute. He is able to farm fast, deal quite a big amount of damage, and fits pretty much every line up. Here are his abilities.

Now let’s talk about items. After starting the game with classic tangoes, a healing salve, an iron branch that increases Juggernaut’s survivability and mana, you should buy Boots of Speed which should then be upgraded to Phase Boots, a Quelling Blade to increase damage against creeps, a Magic Wand. For mid-game items, we suggest Diffusal Blade to improve attack damage, Manta Style, Mask of Madness for lifesteal and attack speed. Finally, if you reach the later stages of the game, you should buy Butterfly, one of the best items for Juggernaut’s late game, Black King Bar, if the enemy heroes deal more magical damage than Blade Fury can protect, Abyssal Blade for more bash chances.

Perhaps you have seen the news: Netflix and the production of a Dota Anime, Dota: Dragon’s Blood, released worldwide in March 2022. Received with very good critics, it put the universe of Dota in the spotlight, focusing on the adventures of some of the heroes you can actually play online. The anime’s main character is Davion, the Dragon Knight. Strong and adaptable, he can stun his enemies and burn all in front of him, often providing his allies the momentum they need to carry them to victory. Let’s see his four abilities.

About items, you should always start with tangoes, iron branches to then build a Magic Wand and a Clarity. Then buy Boots of Speed, a Quelling Blade, and a Soul Ring to help your hero farm and regenerate his health faster. In the mid or late game, remember to buy a Black King Bar to become more durable and jump into the fight (almost) riskless, a Blink Dagger to have greater mobility and Power Treads.

Mogul Khan, the Axe, is a melee strength hero, chosen to create chaos in battle and thrive off of it. He is mainly played to initiate in battles, and perhaps his gameplay can be a bit counterintuitive as he begs for enemies to deal damage to him. But, as you play Axe and test his abilities, you will see how powerful he is.

When it comes to items, of course, we suggest the starting one you can check above; Phase or Tranquil Boots for the mid-game, and absolutely must-buy items like Blink Dagger, to get into the action quick and initiate perfectly with your Q and Blade Mail when you activate such Q to reflect damage. 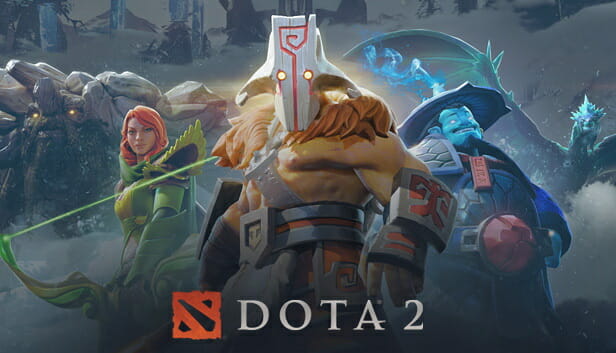 Because hard and pos 4 supports are often the same heroes, here is our choice for the best support for beginners overall in the game: Rhasta, the Shadow Shaman. We chose him because of his ability to easily disable enemies, get some nice kills (not to be taken for granted) and quickly push objectives to win the game.

Among the most important items you should buy on Rhasta, we must underline, apart from Boots of Speed and a Magic Wand, the importance of Arcane Boots to increase the hero’s mana pool and enable him to cast his abilities more often; a Blink Dagger, to close the gap between him and an enemy and disable it more easily. Because SS is a support, it will be more difficult for him to obtain sufficient gold to buy items. Remember, the main item support should buy is Observer and Sentry Wards to give vision for his team. If you find yourself with a considerable amount of gold, and you cannot buy more Wards, then you can also think about an Aghanim’s Scepter to increase your ultimate damage.