Blog » Getting To Grips With Dota 2 Maps

When it comes to Dota 2 maps, things are kept relatively simple, to a degree. There is just one map on Dota 2, which each and every game is played on, however, the map itself is considerably large. For those that have played League of Legends, for context, the League of Legends map is roughly 60% the size of the Dota 2 map. This means that whilst there is just one map for players to learn, there is a considerable amount to learn and understand.

Diving Into The Dota 2 Map

The Dota 2 map is split into two sides for each respected team, or in this case, faction. One is for the Dire faction, whilst the other is for the Radiant faction. The core objective of the game is to destroy the other teams’ Ancient, which is an important building at the center of each team’s base. This is the only way you can win the game, so it’s a constant overarching goal. Now, let’s break down each unique aspect of the Dota 2 map.

We have briefly mentioned the two factions, Dire and Radiant, above. To add more context, the map is split in a diagonal half and is separated in the middle by a river. The Radiant faction is based at the lower-left corner of the map, whilst the Dire faction takes base at the upper right corner. The Ancients previously mentioned are located inside strongholds at the heart of each faction’s base territory.

We have established how the map is divided for each faction, with a river running through the middle of the Dota 2 map, now it times to take a look at the lanes that exist. There are three unique lanes on the map; Top, Bottom, and Middle. Each lane offers a path to the enemy’s base and is guarded by towers along the way that must be destroyed in order to advance. The lanes play a crucial role in the progression of the game, with the majority of the early laning phase being centered around the lanes.

Each team has a lane that could be considered as their “Safe Lane”, for Radiant, that is the bottom lane, and for Dire, it’s the top lane. Each faction has to battle through each other’s Creeps that are gathering close to the towers to provide protection. If you have played League of Legends before, this will all seem fairly familiar to you. 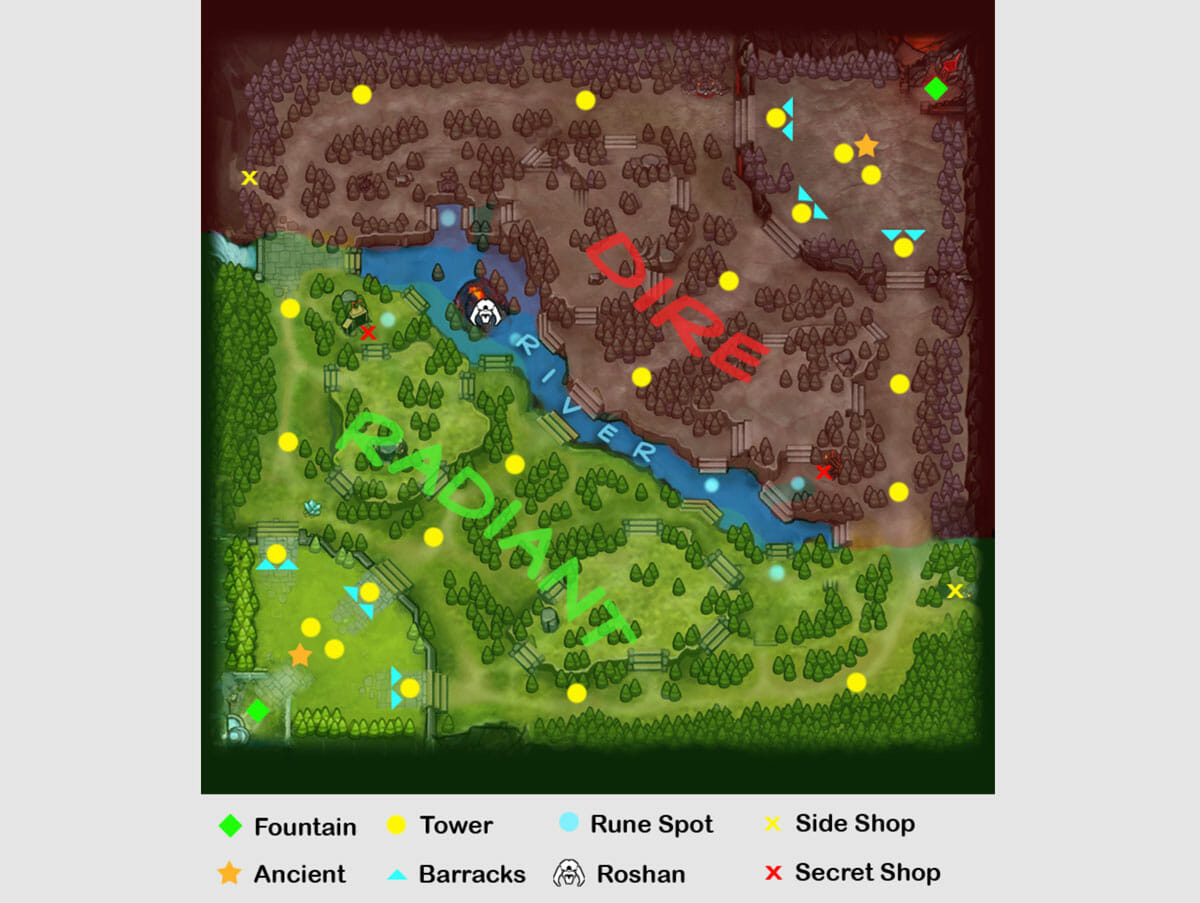 This is the separation between the two factions, and it is surrounded by high ground, which blocks players’ vision on both sides. There are two spells that the river can interact with in the game.

Roshan is an incredibly strong creep located at the western end of the river. There is a useful purpose for each faction to target taking down the beast. If killed, Roshan grants gold to the entire team and also drops the Aegis of the Immortal, which automatically resurrects the holder when they die. As the game progresses and the more times Roshan is killed, the more unique drops will be provided to the successful faction. Please note, this often takes a team effort, and it’s not advised to challenge Roshan solo.

The Jungle is the forested area that exists between the lanes on the map. Whilst on the lanes, there are faction-specific creeps. In the jungle, you will find neutral creeps which can be killed to gain gold and experience. This can be used as an alternative way to level up instead of killing the creeps on the lanes. This practice is known as “Jungling” and is typically assigned to one player on each team.

On the Dota 2 map, there are two types of Runes that spawn in two-minute intervals at different locations on the map. Firstly there are Power-Up runes that grant players bonuses, and then there are Bounty Runes.

From the beginning of the game onward, Bounty Runes spawn at four different locations on the map, two are on the Radiant side, and two are on the Dire side. The Bounty Rune grants 40 gold to the entire team, which scales up by 10 gold per 5 minutes.

From the two-minute mark onward, a Power-Up Rune will spawn randomly at one of two points in the river. In total, there are six possible unique runes that can spawn.

As you may expect, there are buildings scattered all over the map, which can be destroyed by the factions in order to earn gold and experience. In order to reach the Ancient in the enemy’s base, buildings need to be destroyed from the outermost to the innermost. Here are the most important buildings on the map that you should take note of. 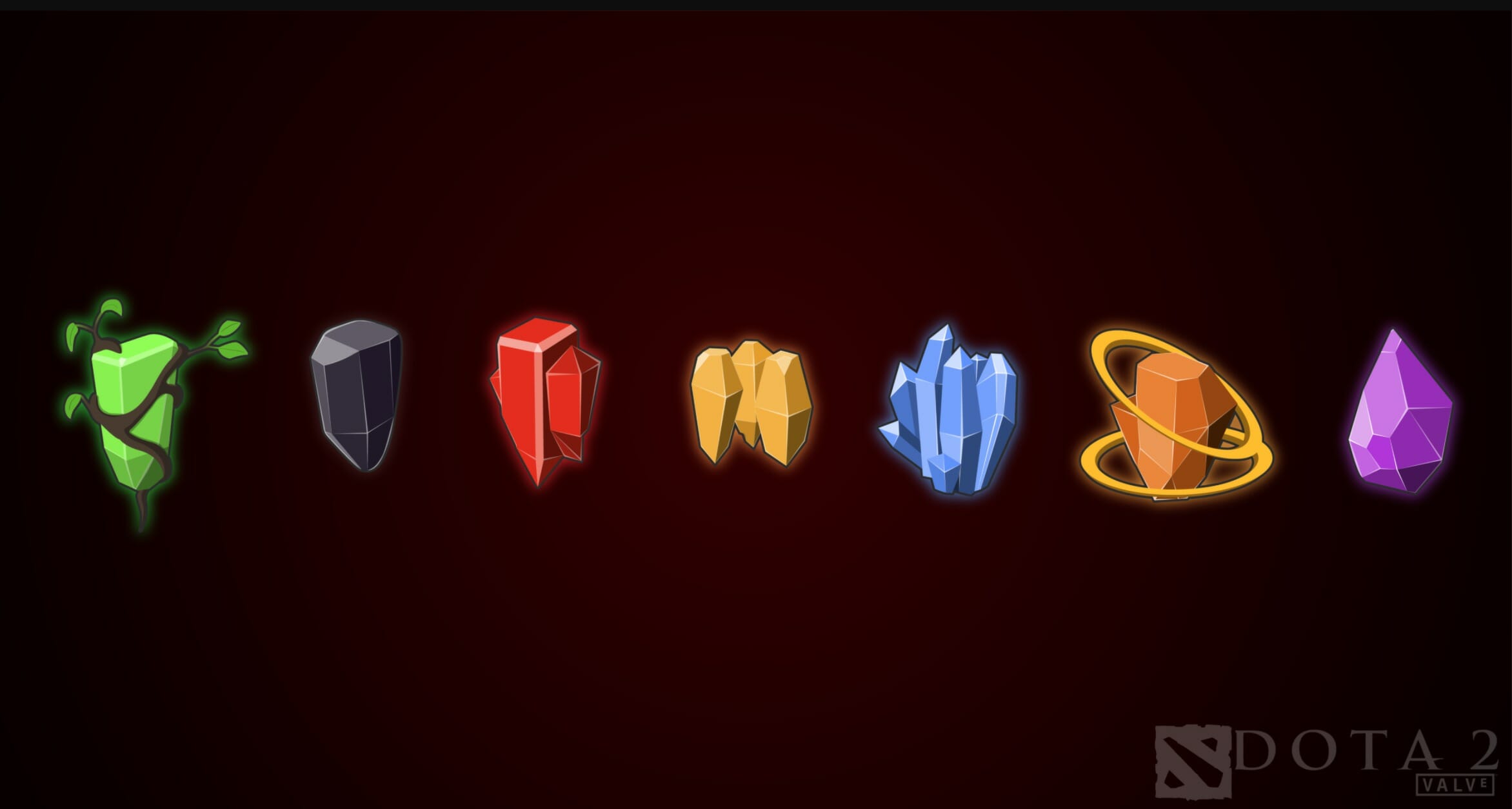 Each faction (team) has defensive towers placed along the lanes leading to their Ancient. The towers deal single target damage to creeps but also enemy heroes. At the beginning of the game and the early stages, a hero cannot take too many hits from the towers, but as the game progresses and they get stronger, it becomes less dangerous. Please note that towers have ‘True Sight’, which means they can see invisible enemies.

Within each base, there are three barracks placed behind towers. There is one for melee creeps and one for ranged creeps. If and when the barracks are destroyed, the opposing team’s creeps will automatically become stronger. If somehow all six barracks on the map get destroyed, all opposing creeps will gain a larger power-up, which will make them a complete pain to try and defend against.

These even stronger creeps are known as “Mega Creeps” can usually assure victory because of their high health, damage, and numbers. If a hero is reckless, they could quickly find themselves dying to some Mega Creeps.

The outposts on the Dota 2 map are indestructible and grant experience in a fixed time interval. Enemy heroes can right-click an Outpost to conquer it, which denies the enemy team from gaining the experience. You can find these outposts located within the primary jungles of both teams. It’s worth noting that these outposts grant vision and the previously mentioned True Sight to the team they belong to.

Yes, it’s a funny name, yes, and each base has seven Effigy buildings that can block enemy creeps reaching the tier 4 towers defending the Ancient. Five of these seven buildings are customizable.

Finally, we have the Ancient. It’s mentioned a good bunch throughout this Dota 2 map breakdown, and it is the main building on both bases. If one team destroys the other team’s Ancient, the game is over. The overall objective of the game is to destroy your enemies’ Ancient. The Ancient does not attack and will slowly regenerate its health over time. It is defended by two towers and cannot be attacked until the towers have been destroyed.

So, that covers everything you need to know about what is on the Dota 2 map. We’ve broken down the Factions, Lanes, Runes, Buildings, and more. Hopefully, if you are new to Dota, this helped provide some context and explanation for what is on the map, and best of luck in the future games.