When you start playing a new game, it can sometimes take a short period of time to get to grips with the ranking system and how everything works. This guide will help fully explain everything you need to know about Dota 2 ranks and how they work. There are a few things you need to know before breaking down each rank on the card. This is because we are focusing solely on ranked matchmaking ranks in Dota 2, so some FAQs could clear up.

You Need To Unlock Ranked Matchmaking

Firsty, before you can jump into the deep world of competitive system Dota 2 where you earn your rankings, medals, and ratings, you need to first grind the game a bit to unlock the game mode. It’s similar to League of Legends and CS:GO, and it helps to maintain a level of competitive integrity in the competitive mode.

If a brand new player was able to dive into a ranked competitive match for their first-ever game, it would be a disaster for not only them but also their teammates. On Dota 2, players need to play 100 hours on the game as your first step to unlock ranked matchmaking. This is done, as, after 100 hours, you should have a decent grasp of the game and its mechanical skills.

Afterward, you need to link a valid phone number to your account as a way of verifying your account. Note that this number can be changed or removed down the line, but there is a three-month freeze on it after you set it.

Finally, players must play 10 calibration matches after you unlock your first medal. We recommend playing unranked games to rack up your 100 hours, as it will be a great way to improve your skills whilst getting a feel for the game, and the system will continually work on determining your skill rating. 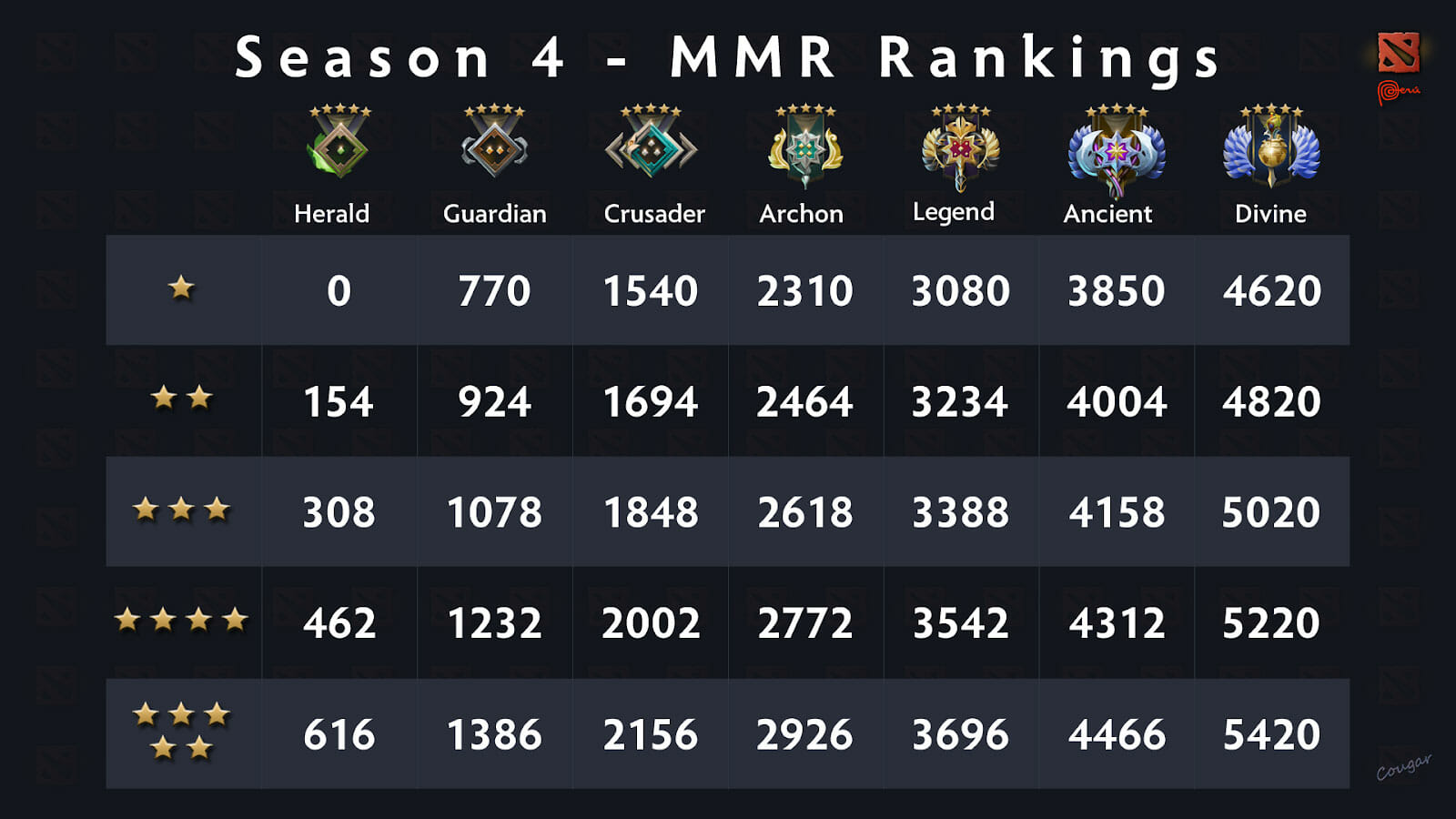 Breaking Down The Ranks

If you’ve managed to grind through your 100 hours of Dota and completed the relevant steps, you will finally be in a position to step into the big leagues and compete in a competitive environment. Initially, you won’t be given a ranking medal or provided with an MMR (Matchmaking Rating) score, as you still need to play your placement games.

This is where the 10 calibration matches mentioned before come into play. They are essentially placement games to help you find your feet and help the game determine your skill rating. Now that’s all cleared up, let’s dive into the different rankings and their respective MMR.

Herald is the very bottom of the competitive scale, and hopefully, you won’t find yourself here too long, and if you do, it’s not the end of the world, as long as you enjoy your time playing. The Herald ranking is for those that fall into an MMR of 0 to 616. Typically ranking is filled with beginner players that have no or little experience with other MOBA titles. For example, if you played for the first time but had played League of Legends, you’ll commonly find your stride quicker than someone who has never played a MOBA title. There are five tiers assigned to every different rank. In regards to Herald, here are the tiers and the relevant MMR for each.

The next step is to reach the Guardian ranks, which ranges across those with 616 to 1386 MMR. It breaks down in the following way:

Once you get out of Herald, you should start to notice that the games’ competitive nature starts to step up, and this will be a continual feel as you naturally progress up the ranks until you reach your skill ceiling. At this point, you have passed the introductory stages of the game and should be familiar and comfortable with it.

It’s here that you should start to select a primary role you wish to play and gain a deeper understanding. You aren’t necessarily going to get to play this role every time, but becoming comfortable with a particular role and understanding the respective Heroes is huge to improving yourself overall as a player.

Congratulations, if you’ve been making your way on the ranks at a steady pace, you will soon find yourself landing in the Crusader ranks, where those with 1386 – 2156 MMR live. We have mentioned getting a deeper understanding of roles whilst working through Guardian, but Crusader is where you need to start studying the game to see improvements.

This is where players will start to be more informed and up to date with the meta heroes and using the most efficient builds and items possible. You can expect this to be one of the biggest grinds you will experience, especially if you’re actively pushing to try and reach Archon, which is the next rank. Below is how each section of the Crusader rank breaks down.

You should have a good understanding of the game, know your best role, and have at least one other role that you can perform to a respectable standard when required. With more than 100 heroes in the game, it’s vital to have experience and understanding of several of them and know who to select to create the best overall team, depending on the meta at the time.

You’re hitting the bigger leagues now and are working towards becoming a higher level player. If you’re here, you will have between 2310 and 3696, which breaks down in the following format.

This will be the first time you hear people care about vision on the map much more than any previous rank. Vision can be key to work towards a victory on Dota 2, and when you reach the higher skill level, it can actually be a make or break situation. Take everything you’re learned so war, learn how to ward efficiently for vision and communicate well with your team, and you should be able to progress at a good rate. 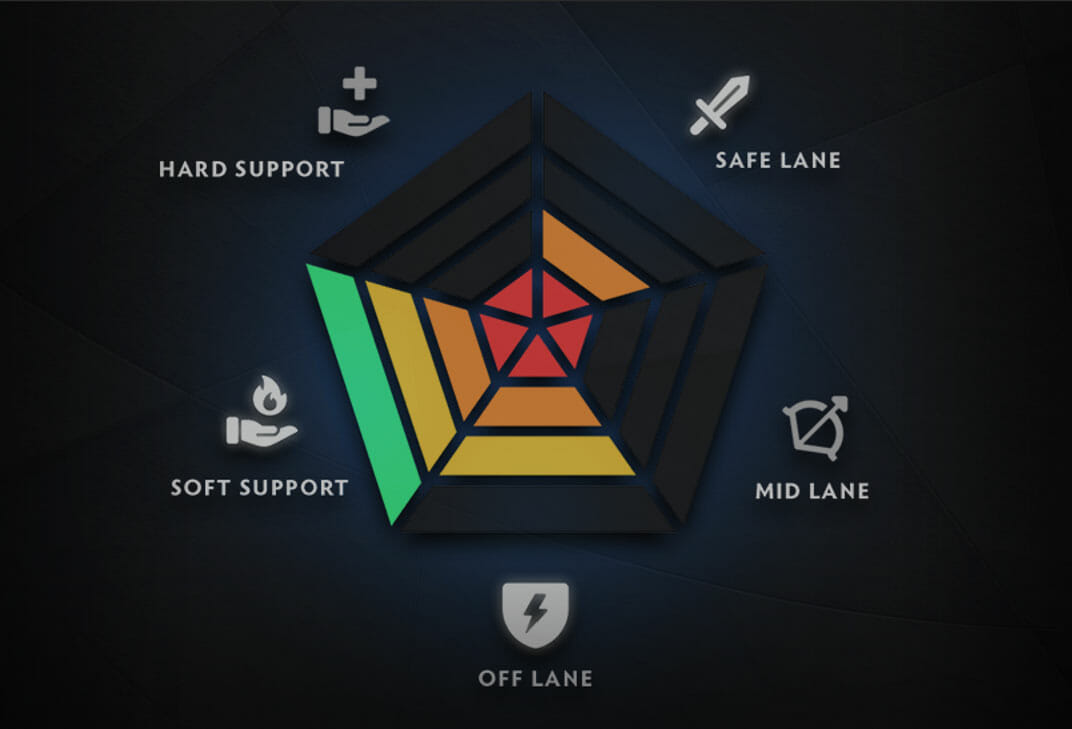 Falling into the Ancient rank might not sound like an upgrade, but it is, and you will have anywhere between 3696 and 4466 MMR at this rank. We mentioned a previous jump being tough, and that tough jump between ranks will prove useful for you here. This is arguably the harder ranking to try and grind through to reach Divine. This is because players in this rank have a great grasp of the game and typically play to a high level, meaning every game of matchmaking is tough.

This is the second-highest rank possible in the game. If you’re reached this far, you’re in the top & of Dota 2 players in the world, so congratulations on that. It breaks down like this ranging from 4466 to 5420 MMR.

Here you are one step away from reaching the glory of having an Immortal rank, but it will require blood, sweat, and tears to get there. Dota 2, much like other esports titles, has the potential to send players on tilt, and the mistake many make here is trying to grind Divine whilst playing titled and annoyed, which we highly suggest you don’t.

If you have 5420 MMR or higher, you will be deemed as Immortal. This is reserved for players who make it onto the regional leaderboards and earn respective Immortal medals, with their ranking displayed beneath the medal. You should like how the Immortal medals have sparkling particle effects in-game, creating a little bit of flair for those that have earned it. The regional leaderboards break down like this:

If you’re playing at this level, you’re at the top of the ladder for skilled Dota 2 players.

We hope this guide has helped break down and explain each of the Dota 2 ranks work and detail their MMR rankings and the sort of players you will come across in each rank.