Blog » How to Rank Up in Dota 2: An Overview

DOTA 2 is unquestionably one of Valve’s most popular games. DOTA 2 is an online video game that takes place in an arena where a team consisting of five (5) players battle it out in destroying each other’s thrones. It’s a follow-up to Defense of the Ancients or an upgraded version of it.

A lot of trolls said that the game is already washed out due to the worldwide pandemic, but in a recent The International 10, it proves how the game is still one of the most popular video games of today. It is also one of the most difficult MOBA games that exist in the world of video games. Not only does the game require the player to be technical in-game but also to be constantly good in making decisions to win every situation or defeat the enemies by breaking their throne.

And each player has an assigned matchmaking rating (MMR) in the game, which is an incredible and unique technique for ranking players. MMR is a number that rises with each ranked match the player wins and falls from time to time they lose a match. Every Dota 2 player queues for a ranked game to increase his MMR and progress through the game’s tiers. Many people attempt to raise the MMR but are unsuccessful. Thus, this guide will help players boost their MMR or to win every match. But before anything else, a player(s) should know the basic knowledge about ranking up in Dota 2. 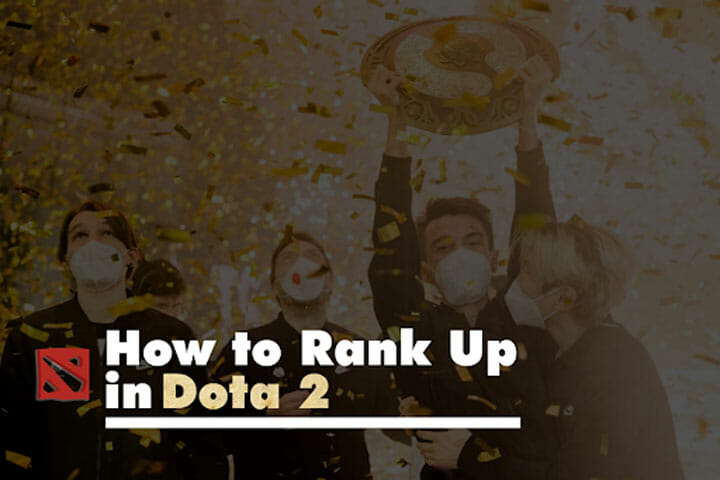 About Rank Up in Dota 2

Dota 2’s complicated ranking system has eight tiers, starting at the bottom with Herald and progressing to Immortal except for Immortal. Each rank tier has five sub-ranks, with one being the lowest and five being the highest. As a result, there are 36 ranks in Valve’s cult classic MOBA. There are a lot of rank badges for Immortal, as you can see from the list above. That’s because you’ll get a glittering badge to display based on where you place in the Immortal leaderboards – but they can’t be displayed as individual ranks.

And reaching the highest rank, Immortal, requires the player to have a good set of individual skills or even personality as patience, coordination, and not being toxic are a few examples to be on top of the game. Below are the overall ranks and the corresponding MMR to rank up in Dota 2:

Every rank bracket has its level of competition where in most cases, those who are lower bracket ranks: herald, guardian, crusader, and archon are considered as the toxic group as most of the time, players here are new ones or those who didn’t improve from years of playing.

Moreover, bracket ranks Legend, Ancient, and Divine are players who are considered well-rounded, have team coordination, are focused on team roles, and have an improved mindset on how to win a game. In terms of the team roles, on these brackets, players are expected to know what role they are playing, if it’s a hard-support role, then this player is expected to know dewarding, buying wards and healing salves for their carry, carrying teleportation scrolls whenever there’s a gank in any lane.

Rank Immortal is considered the highest tier rank and most competitive bracket as most players are considered professionals. Some of these players are in 1-3 small and big organizations. And they are more focused on their role. For example, if a professional player is known for being in the number 1 position or being the carry, then he’s expected to be good at heroes that are aligned with the carry role. Also, unlike ordinary players from lower rank brackets, these players are expected to play the game for at least eight (8) hours every day, as most organizations require this because of the meta of every patch. 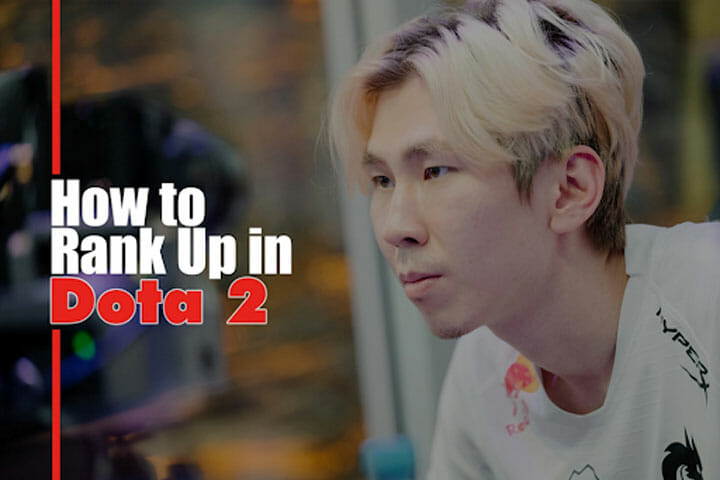 How to Rank Up Fast in Dota 2

There’s no perfect process or procedure to easily increase rank in Dota 2 because the game requires every player to have a high ceiling of competitiveness and knowledge on game mechanics in-game. But here are some tips or guides that would improve your MMR in Dota 2:

In most successful competitive players, like Collapse of Team Spirit (The International 10 Champions) and JeRax of Team OG (The International 9 Champions), their role is one of the reasons they keep achieving great things in their Dota 2 career. Any player needs to stick to his role as there are about 121 heroes in the game, and it would be difficult for a player to improve if he has no role to stick to.

Understanding the Meta for the Season

What keeps professional Dota 2 players insanely good at what they do is because they understand the meta for every season. Meta or metagame is a current trend that the community considers the best way to play the game. And this constantly changes in every season and is influenced by public opinion, professional players, and balancing patches.

Understanding the meta would be beneficial for any player to rank up in Dota 2. Thus, any player should always aim to pick heroes in their games that are currently in the meta. For example, if Marci is excelling as an offlane in today’s patch and the hero’s winning rate is at the top of the leaderboards, an offlane player should strive to understand the hero and use him in his ranked matches. As a result, he will have a more powerful hero and a higher chance of winning more bouts.

Know Your Heroes and Spam It

Rank in Dota 2 or ranking up an MMR is one of the most complex systems compared to other MOBA games as it not only requires patience, knowledge but also has to be consistent on every hero he plays. And in every rank bracket, there is data regarding the most successful heroes played, and it is significant for any player to know his role and the corresponding heroes for his rank.

If the player has decided for what role he should take, then he could also search on Dota2buff for the most played heroes for his role in his rank bracket. Once he has researched the comfort heroes for his level, he can play and spam this to improve. Other players may find this tip boring but being consistent is one of the ways to be an improved player in Dota 2.

Communicate With Your Teammates

In any situation and relationship, communication is one of the ways to be successful, and there’s not much difference in Dota 2. The game is composed of five (5) players on each side, the radiant and the dire, which is significant for players to have healthy communication with each other.

Also, in most in-game crucial situations like team fights or defending the base, it requires communication in the team as there are decisions to make for the team to win. But if there is a bad atmosphere towards the teammates, like flaming towards each other, it would be helpful to mute them as it won’t help the mood and mindset in winning the game.

One of the best ways to increase rank in Dota 2 is to observe professional players play to gain better techniques in the game. Also, downloading replays from a professional game to see how the pros put a decent farm on the line early in the game is quite helpful.

Similarly, players may watch several live games where the majority of the professional players are waiting in line for ranking matchups. Some approaches, such as creep pulling when the lane isn’t going the player’s way, deciding when a player’s ready to join a team battle, and how multiple skill and item sets function in different settings, are simple to grasp. These techniques will improve the playing style and allow the player to perform better in their rank.

One of the best methods to improve a player’s Dota 2 matchmaking rating is to start playing more. He might not quickly boost his MMR if he only queues one or two games every day. The reason for this is that he might have a lucky day and win both of the games for which he queued, but there’s a chance he’ll lose two games the next day and find himself exactly back where he was the day before.

If pro players could play for more than ten (10) games a day to improve their gameplay and skills in the game, then an average player could also do it.

Increasing Dota 2 MMR has long been a goal for all players in the game, and there are other ways to increase rank in Dota 2 but what is mentioned above are the easiest ways to follow to improve. Although it is not simple, some players have succeeded and have offered their views on how to increase an MMR. The above ways to increase rank in Dota 2 are helpful, but the two most important ones are to play more games every day and understand the meta.